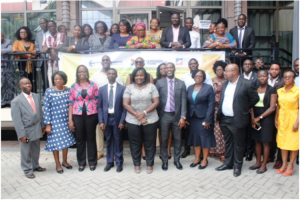 Anti-Corruption Advocates push for new Beneficiary Ownership Information Law to curb CORRUPTION. By Rebecca EkpeAnti-Corruption Advocates have met in Accra to build the capacities of CSO's and the media on Beneficial Ownership Disclosures.The objective is to support new Beneficiary Ownership Transparency Champions to understand, share and use beneficial Ownership Information to fight corruption.During the discussion, it came to light that there is the need for the Registrar Generals Department to heighten its monitoring Mechanism to minimize fraud in issuing out certificates to companies.The Ghana Integrity Initiative, GII is collaborating with the Ghana Extractive Industries Transparency Initiative and the Natural Resource Governance Institute to build capacities on Beneficial Ownership.GBC’s Rebecca Ekpe reports that Ghana is one of the first countries in Africa to have a legal provision on issues bordering on Beneficial Ownership.However, it still remains to be seen if concrete steps have been adopted to implement or for that matter punish the real beneficiary owners of a business in case of illegalities, such as tax invasion.It is in light of this that the GII with support from its parent company, Transparency International and UK AID is pushing for the establishment of a Beneficial Ownership Register.A Team Lead with ''Strengthening Action Against Corruption, Korieh Duodo says a Beneficial Ownership Register for Ghana, will serve the country's interest locally and internationally in the fight against corruption.The fight against corruption requires the collective will of the people, but Media Consultant, Doctor Doris Dartey is certain more exposes on corruption by journalists can curb the menace.The absence of sanctions is believed to embolden politicians and bureaucrats to nurture corruption.GII's Mary Addah says it intends to continue with more media and Civil Society engagements to collect inputs for a new Beneficial Ownership Law for Ghana.Story by Rebecca EkpeGBCONLINE