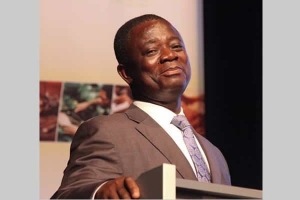 More details are emerging in the case against former Chief Executive of COCOBOD, Stephen Opuni who is standing trial on 27 counts of willfully causing financial loss.

The case filed at the Accra High Court Monday, March 12, 2018, tells a story that supports the charges including money-laundering, corruption, defrauding by false pretence and abetment of crime.

The former COCOBOD CEO Dr. Stephen Opuni has been charged with willfully causing financial loss to the state to the tune of 2.1billion cedis in three separate contracts for the supply of fertilisers from Germany.

The state is prepared to prove that Dr. Stpehen Opuni knew businessman, Seidu Agongo and his Agricult Ghana Ltd were in no position to supply the fertilisers but went ahead to sign the contracts.

The 10-page statement of claim by the state is littered with grim stories of corruption, grounding the 27 counts of causing financial loss to the state, money-laundering, corruption, and abetment of crime.

The story of how the state lost the colossal sums began barely three months after Dr. Opuni was appointed by President John Mahama in November 2013.

Dr. Opuni from January 2014, the state claims, conspired with Seidu Agongo and Agricult Ghana Ltd to secure a 43.1m Ghana cedis fertiliser contract even though they "knew it to be false at the time of making" the contract that the company could supply the fertiliser from Germany.

The fertilisers, supposedly from Germany, were meant for the 2013/2014 farming season.

This same strategy runs through two other contracts given out in the three farming seasons from 2014 to 2016.

By the time Dr. Opuni was a year in office, a similar contract for the 2014/2015 farming season was dished out to the same supplier at a cost of 75.3million cedis.

By the next 2015/2016 farming season, the contract sum for the fertiliser for that season jumped to 98,9million cedis.

This brings the total amount of payments to 2.17billion cedis in three years, sums paid by COCOBOD which in 2016 needed to raise a $1.8bn loan to buy cocoa beans from farmers.

Contrary to the contractual agreement requiring Seidu Agongo and Agricult Ghana Ltd to procure the fertilisers from Germany, the company produced the products locally.

The fertilisers were manufactured without registration in contravention of the Plants and Fertiliser Act 2010.

These fertilisers branded Lithovit Foliar were then supplied to COCOBOD.

The state claims that Dr Opuni had agreed to act with the other two to willfully cause financial loss to the state.

The contracts in 2014 and 2015  worth 43.1million cedis and 75.1million respectively were award through sole-sourcing. But the procedure for sole-sourcing was not followed, the state claims.

The 2014 contract was awarded without any price quotation, effectively giving the supplier a blank cheque.

The Chief Executive, according to state prosecutors, also accepted a 25,000 cedi bribe from Seidu Agongo in October 2014.

He would later misrepresent facts to the Public Procurement Authority in his efforts to ensure Agricult Ghana obtained the contracts unfairly.

The prosecution is expected to be led by Chief State prosecutor Evelyn Keelson who successfully prosecuted two people, one of them a former top government official who was also an MP, Abuga Pele.

The former Chiana-Paga MP is serving a six-year jail sentence whilst his accomplice, Philip Assibit is serving 12 years imprisonment.