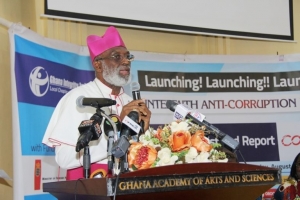 Reverend Gabriel Charles Palmer-Buckle, the Archbishop of the Catholic Archdiocese of Cape Coast, has urged Ghanaians to step-up the fight against corruption.

He said Ghanaians were incurably religious or God-fearing and that the country could boast of more than 90 per cent believers.

He said the 2010 census indicated that about 71 per cent of the population professed to be Christians; stating that Christians and Muslims were responsible for 90 per cent of the corruption in the country, which was a serious indictment.

He said believers had been given the light of God to know that corruption was evil, which they must shun away from.

Archbishop Palmer-Buckle made the appeal in his remarks at the launch of the Interfaith Anti-Corruption Project dubbed “Speak Up, Resist and Report Corruption” in Accra.

The Project, which is a call to action, seeks to enlist the support of religious leaders and faith-based organisations to lead the fight against corruption as required under the National Anti-Corruption Action Plan (NACAP, 2015-2024).

The Project is an initiative of the Ghana Integrity Initiative (GII) with funding support from the Danish Government.

Archbishop Palmer-Buckle quoted former President Jerry John Rawlings as having said: “If you are not part of the solution, then you are part of the problem”.

The Archbishop, therefore, appealed to Ghanaians to be part of the solution to the menace of corruption. “Let’s go back in teaching our young people, offering them solutions to solve part of the problem,” he said.

He recounted that he was crushed in his spirit, when he watched the Anas Aremeyaw Anas expose on corruption in the Ghana Football Association dubbed “Number 12” and those involved in the evil act, of receiving the bribes were not even ashamed but kept saying “God bless you”.

He said all the religious faith in the country frowned on corruption; declaring that “I believe it’s now time for moral, socio-cultural re-engineering of our Ghanaian society”.

He urged Ghanaians to support the anti-corruption agencies such as the Auditor-General, the Special Prosecutor, the Judiciary, the Commission on Human Rights and Administrative Justice (CHRAJ), the Criminal Investigations Department (CID) of the Ghana Police Service, and the police.

Sheihk Aremeyaw Shaibu, the Spokesperson of the National Chief Imam, said the Anas Expose had brought under the spotlight the extent to which corruption in the public institutions were undermining public confidence in the officials and mentioned the existence of ghost names on government payrolls as reported by the Auditor-General as a major concern.

Sheik Aremayaw said the leakage in examination questions to students and teachers of some schools was an on-going phenomenon yet to be addressed and suggested that the National Hajj Committee be audited to ensure probity and accountability.

Mrs Linda Ofori-Kwafo, the Executive Director, GII, said the Project aimed at stirring up the interest of citizens to speak up, resist and report corruption related issues through existing channels like the Advocacy and Legal Advice Centre.

She expressed the hope that at the end of the project implementation, GII, would record a 40 per cent decline in incidences of corruption in the country.

Madam Tove Degnbol, Danish Ambassador to Ghana, said religious leaders had a strong role to play in getting the message on speaking up, resisting and reporting corruption.

Mr Richard Quayson, Deputy Commissioner, CHRAJ, said Ghana had lost too much to corruption; hence the nation could not afford to continue on that trajectory, has said.