Communication » NEWS » GII in the News. » Religious leaders have the mandate to stop corruption – Danish Ambassador

Religious leaders have the mandate to stop corruption – Danish Ambassador 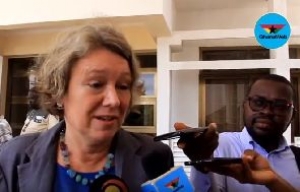 Danish Ambassador to Ghana, Her Excellency Tove Degnbol, has asserted that religious leaders in the country have the power to ensure that the public abstain from indulging in corrupt practices.

Tove Degnbol explained that Pastors, Imams, Traditionalists are very much respected by the public hence their impact in the fight against corruption will help achieve the purpose of reducing the canker.

“I think Ghana, compared to many countries including my own, is a country where religious leaders are very much respected where there is a very high phase in the communication.” She said.

She was speaking at the launch of an interfaith anti-corruption project ‘Speak up! Resist! & Report Corruption’ organized by the Ghana Integrity Initiative (GII).

The programme was centered on supporting various religious leaders to educate the general public on the importance of not paying a bribe, not taking bribes and reporting corruption.

Emphasizing the importance of involving Preachers and Imams in the project, the Diplomat believed that the involvement of religious leaders means that there are good chances the project will cause an effective change.

Religious leaders have the mandate to stop corruption – Danish Ambassador
She indicated that, “Religious leaders have a special position in communicating and conveying the messages in a very reliable way to their constituencies; that it is so important not to get involved in corruption. This is the only way that the society can prioritize and spend their resources in an efficient way instead of seeing the money going to the wrong way and wrong pockets.”

Tove Degnbol lauded GII’s initiative of “taking the right step” by working with spiritual leaders in spreading the message on not being involved in corruption.

“Ghanaians are very religious and they would want to do the right thing,” she emphasized.